A duplicate of our 2017 article?  No, history repeats itself only on sheet music ***  The 92nd Annual Chester County Old Fiddler’s Picnic plowed through humid overcast skies with spirited rotation upon the main stage.  Within the picking’ glen a mostly older crowd kept up the tempo.  Friends and acquaintances reunited, a few hasty measures before their turn.  Afternoon temperatures hit 97˚ but did not curb enthusiasm.  Kids ran around, young families spread out lunches on blankets, dogs barked and played.  Attendance was a shade subdued but we will come back roaring in ’22, no doubt.  Pickin’ and fiddling’. 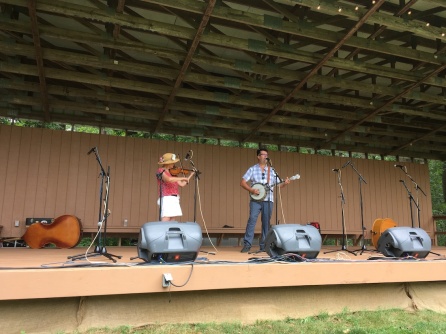 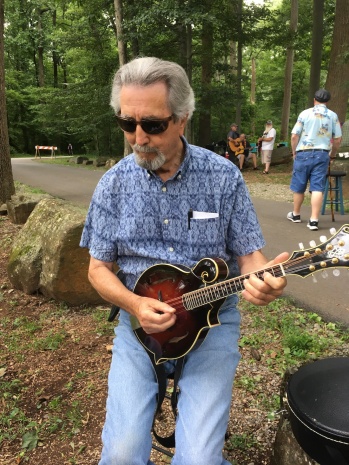 This entry was posted in Music and tagged bluegrass, Fiddlers Picnic.

Old fiddlers … young fiddlers … everything in between.  Add a gazillion guitars and banjos, a heap o’ mandolins, a few upright basses and dobros.  Let’em loose within a shaded grove up the hill from the Main Stage.  That’s the Old Fiddlers’ Picnic.  Now in its 89th year, it was old even when my folks were courting teenagers from a nearby mill town.

Aside from the stage, no one is in charge.  No one is there to drink or fight.  There are no genre turf wars.  Just a peaceful gathering of people without anything to prove.  Playing for fun, sharing their gifts, enjoying the company of old friends.

Because Sunday’s Picnic was Saturday’s rain date, several acts cancelled.  Naturally I was roped into performing.  With only Hugh’s mandolin and nothing planned, it was the perfect opportunity to fail spectacularly.  Hugh’s Collings MT2 is *showing its age* (stage whisper).  The frets are getting low, and while she sings a tune better than most, it takes a lot of effort to put her in the mood.

Fortunately I ran into Glenn McNemar of Kennet Square.  Glenn both maintains the local mandolarium while making mandolins full-time, and brought a fresh build with him.  Not six weeks old, proud of fret, soft in demeanor but unconsciously vivacious, his mandolin was the star of my time slot.

Five hours of playing, bug bitten, dehydrated, sore, hungry, I again enjoy one of the finest small music festivals in America.  Just like the one next weekend in a county park near you. 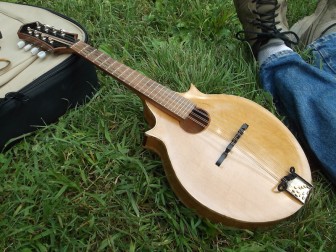 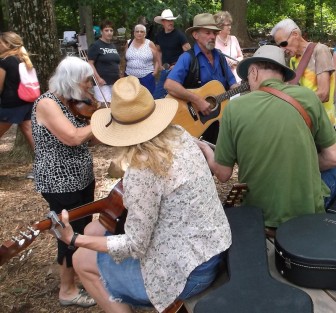