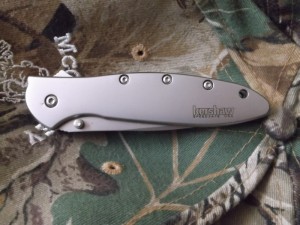 Machined stainless steel.  Finished edges.  No burrs or rough spots.  Meticulous assembly.  Spiffy design.  Some people are drawn to mechanical devices of superior nature.  We’ve always had a happy eye upon the Kershaw Leek series.  Designed slim and unobtrusive in the pocket, so you’ll carry it every day.  When you need it, the knife will function flawlessly.  Year after year.  Decade after decade.

A nice chance of acquisition recently appeared.  At a little less than half list price,  I bought one of my “grail knives”.  The stainless Leek.  In near perfect condition, I’ll have a USA-made heirloom-quality knife to give my son or nephew, daughter or niece.  Or even a total stranger, returning Karma to the vast repository circling the heavens.

Many consider the Kershaw Leek an ideal EDC – everyday carry knife.  After daily using a Gerber as my EDC, within my tradesman profession and as a handy household tool, I find conflict in that statement.

The Kershaw is perfect for someone who wants a carry knife at all times;  it disappears into the pocket through size and design.  I’ve become accustomed to a larger handle for more intensive cutting, poking, slicing, and prying.  The larger Gerber Covert Folder better suits my use.  But if the Gerber is unavailable, it will be the Leek for me.

Most importantly, I now have a “dress knife” that will not weigh down fine trousers.  LEEK IS LIGHTER with a more robust pocket clip.  87 grams vs. the Gerber Covert Folder’s 113 grams.  Not only will the Leek hang more comfortably upon the lighter fabric of dress trousers, it will remain affixed where I secure it.  Perfect for cutting a piece of string & opening a box.  Ideal for an emergency tracheotomy.  Patiently waiting for duty if asked. 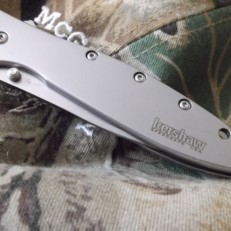 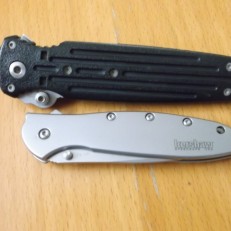 A COMPLETE STRANGER  one day saw my need of a decent pocket knife.  Camping near Fort Pickens along Pensacola Bay, I was making a hideous mess of my tent guide line.  A storm approaching, wind rising, rain pelting.  There I knelt, making pitiful slashing gestures with the camping equivalent of a butter knife.

In short, a used but serviceable -and razor sharp- knife was lent, lines repaired, the loaner returned.  Almost.  “Keep it” greeted me the next day, along with the sun, a humid funk rising from the damp ground.

Never absent a pocket knife for a single day after that,  its utility proven time after time.  One can cut, pry, poke, slice, shave, nick, flatten, abrade, any number of additional operations with a good knife.  Operations!  Missed that one.  Yes, an emergency tracheotomy is not beyond a sharp pointed knife and improvised breathing tube.  If you want an appendectomy on a desert island, better hope someone -like me- has a good knife in their pocket.

When my knife broke, I bought an identical model -staggered at the sum- but happy again to be so equipped.  Chance conversation illuminated me on Gerber’s warranty.  Forever.  I sent it in, and they repaired the original.  Now I have two.  A spare, in case one is at the cutlery professional, having it’s edge honed.

THE KNIFE IS the most important tool ever invented.  Five of the 20 most important tools are derived from the knife (the chisel, the lathe, the saw, the scythe and the sword, in case you are testing your game show skills).  Is it any wonder so many men choose to carry a pocket knife everywhere they go? How handy it is for cutting, prying, poking, and slicing.

An American knife maker came to my attention through his perfectly proportioned work; graceful blade,  substantial handle, artistic mating of wood to metal. Although not a hunter, I could not resist doubling my collection of fine cutlery with the addition of this knife.

Why own a knife like this?  If you ever go camping (not INSIDE the Franklin Institute with the Boy Scout Troop, mind you), a knife is the #1 tool you’d want to improve your site.  This beauty from Sandown Forge features CM154 stainless steel heat treated to a Rockwell C hardness of 59.  Bad a§§ hard!  Go ahead and hack down the surrounding forest!  You won’t hurt the knife.  A hunter in the family, you say?  This is the perfect belt accessory for wild pigs through bison.  Gotta process the harvest for transport.

And for the gentleman philosopher, tilted back in his office chair after another nail-biting day on Wall Street?  It’s a really well crafted knife, screaming QUALITY.  Great for making your buddies jealous.  A gentle reminder that it’s just a few steps from the trenches, knife in hand, fighting for your life.