Behind many ten minute successes lie hours of preparation.  According to my dentist during a little buffing after a $200 smear of white Bondo.  Lately, at the secretive Luthier Laboratories, pushing boundaries past conventional instrument repair, we’ve found those preparation-to-execution numbers to be a bit skewed.

In this case, hours and hours were spent converting this “Sold For Parts” French violin into a viable instrument.  As we near the final cavelletti, hands and clamps in piaffe and pirouette, this early 19th century Mirecourt nears a milestone.  Sound post and tone tap, the first in 120+ years we surmise (the repairs of 1886 were never completed). 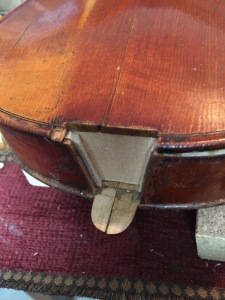 At every step, to poke, prod, shave, raise, lower, scrape, and in general convince the parts to obey,  our Lie-Nielsen ⅜” chisel is there to assist.  An extension of my fingers but with enhanced fingernails.   A2 Tool Steel, hardened to Rockwell 60-62, cryogenically treated and double tempered.

Our mortised end block holds us up no longer.  After this Mirecourt skipped the entire last century, we’ll soon be having a conversation.  Talk about dropping out!  Welcome back!